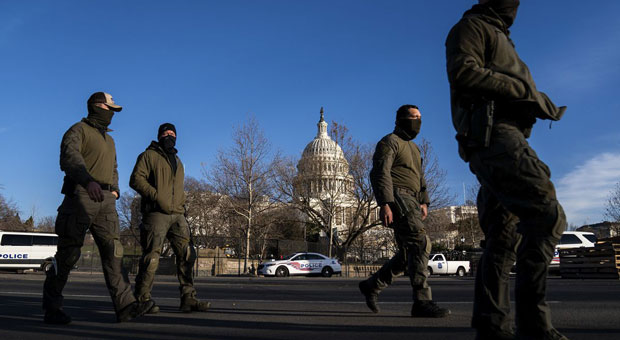 A year after Democrats objected to improvements and building of President Donald Trump’s border wall with Mexico, a new protective wall has been erected around the U.S Capitol Building to keep lawmakers safe.

The reason the fence has gone up at the Capitol building is the same as the border was in Mexico – to prevent unauthorized people from entering.

“The National Guard will deploy over 6,000 guardsmen to the city by the weekend and will finish setting up the 7-foot-tall fencing around the Capitol; Army Secretary Ryan McCarthy said,” the outlet reported.

The Capitol grounds are now completely surrounded with fencing. pic.twitter.com/OkBdUU1YBy

It is probably agreed that the White House was not surrounded by walls and fencing while being protected by heavily armed Secret Service agents; its grounds would have been stormed just like the Capitol.

‘The National Guard will deploy over 6,000 guardsmen to the city by the weekend’

If such rioters had laid their hands on Trump, it would not be worth thinking about.

Last year, Trump was taken to a White House bunker when a condition “red” was declared.

Following a scuffle with agitators around the fence, “multiple” Secret Service agents were injured.

Coronavirus, Riots, White House Siege: unfolding simultaneously in the US… And Trump is hiding from protest in underground bunker. pic.twitter.com/8exN1A0CKT

The scene was described as “an absolute chaotic mess” by MSNBC’s Brian Williams.

According to CNN’s Alexander Marquardt, the decision by the Secret Service to move Trump to an underground bunker showed “that there was a significant fear of the situation that was unfolding out here.”

CNN host Don Lemon also said Trump would not have been taken to the bunker unless there was a “real emergency.”

But none of the establishment media outlets at the time reported that protesters were engaged in an “insurrection” or “coup,” despite using the language so heavily during last week’s rioters at the Capitol.

Pelosi in 2019 called Trump’s border wall with Mexico an “immorality,” so it would be interesting to see if she uses the same notion to the fencing going up around the Capitol.

On a visit to the border in Alamo, Texas, on Tuesday, Trump celebrated the completion of 450 miles of the new wall.

“In every region that we’ve built the wall, illegal crossings and drug smuggling have plummeted,” Trump said.

“In the Rio Grande Valley, crossings have dropped nearly 80 percent,” he added.

“In Yuma, Arizona, illegal entries have been slashed by 90 percent.”

REMINDER: Here’s what happened at Trump’s inauguration in 2017