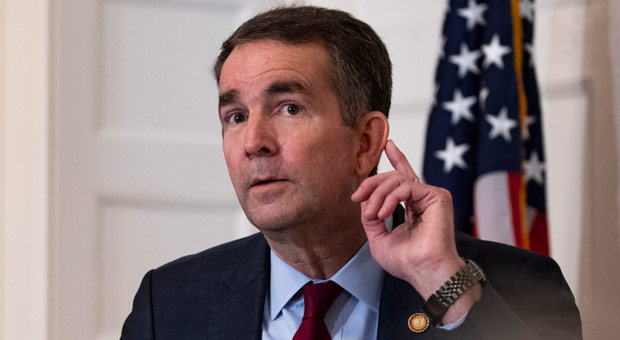 that Gov. Northam is scheduled to announce the gun ban Wednesday afternoon.

“Democrat leaders … [have already] used a special rules committee to ban guns inside the Capitol and a legislative office building,” according to the AP.

The unilateral declaration by Northam will expand the ban to include the grounds surrounding the capitol.

AP says “two state officials who were briefed on the plans” alerted them to the coming ban.

Gov. Northam’s decision comes just days before a pro-Second Amendment rally on January 20 in Richmond to push back on his extreme agenda.

The demonstration is in opposition to Democrat-sponsored gun controls and is scheduled to be held on capitol grounds.

The announcement comes after massive numbers of pro-gun activists flooded the Virginia Senate this week to show state Democrats that they were not going to allow their rights to be taken away.

.@NRA members getting ready to Stand and Fight in Virginia! #valeg pic.twitter.com/XGs7glbtER

During a cabinet meeting in November, Northam highlighted numerous extreme gun control policies that Democrats in the state were going to push in 2020, The Washington Post reported.

These policies include “universal background checks, banning the sale of [semi-automatic firearms] and high-capacity magazines, restoring the law that limits purchases to one gun a month, and a red flag law that would empower a court to temporarily remove a gun from a person deemed to be a risk to himself or others.”

“We will at least start with those,” Northam said.

When asked about confiscating guns from law-abiding citizens, Northam responded; “that’s something I’m working [on] with our secretary of public safety.”

The Washington Free Beacon reported last year that during the most recent elections, Democrat candidates were silent on whether they supported Northam’s extreme gun confiscation plan.

Gun confiscation and other gun control measures have been part of Northam’s agenda, but took on increased importance after a picture of two men, one in blackface and the other in KKK robes, was uncovered on Northam’s page in a medical school yearbook.

In his first major public appearance after the scandal broke, Northam called for a special session of the legislature in order to reconsider his gun control package, following the recent strategy used by prominent liberals of pivoting to gun control after brushes with controversy.

Democrats have a strong incentive, in the form of millions in dark money, to implement new gun control laws.

In each of the last three election cycles, Everytown for Gun Safety—backed by billionaire Michael Bloomberg—and other gun control groups have spent large sums of money backing Democrats.

Everytown spent $2.5 million to help push Democrats into the majority in Virginia, while the National Rifle Association spent just $300,000 supporting Republicans, according to CNBC.

Gun rights activists have surged across the state in response to Northam’s anti-freedom agenda, as the overwhelming majority of the state’s counties have declared themselves to be sanctuaries for gun rights that will not comply with Northam’s extreme agenda.

“The grassroots resistance to Virginia Democrats’ extreme anti-Second Amendment agenda has exploded as nearly 90% of the counties in the state have declared themselves to be sanctuary cities in response to the Democrats’ anti-freedom agenda,” The Daily Wire reported in November.

“More than 100 cities, towns, and counties have passed resolutions in preparation for Democrats taking over the state who had indicated a desire to confiscate semi-automatic firearms from law-abiding citizens.”

Last night, hundreds of NRA members joined shoulder to shoulder in Roanoke, Virginia to discuss how they will stand and fight against the Northam/Bloomberg gun confiscation plan.

We sat down with a few of these patriots and here was the message they had for Richmond. #valeg pic.twitter.com/GMrufukada

Hundreds of first time political activists attended an NRA event at the start of the month as the resistance to Democrats’ extreme policies continue to rapidly grow throughout the state.