Democrats are exposed in clip calling for uprisings 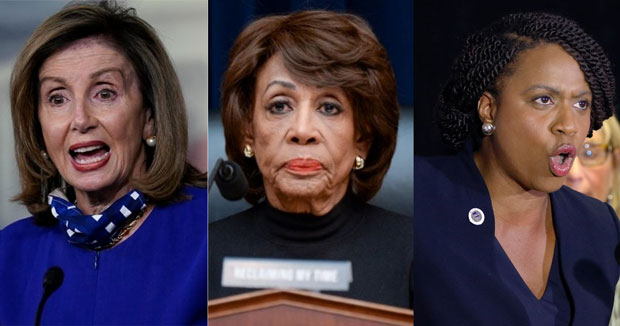 As Democrats call for the impeachment and removal of President Donald Trump in the light of the recent riots on Capitol Hill, their projected moral high ground is now threatened by a viral video showing leaders like Nancy Pelosi and Rep. Ayanna Pressley calling for violent uprisings in 2020.

Last year was dominated by destructive and violent left-wing riots, which were promoted by Democrats who called for “unrest in the streets,” harassment, and violence.

Pelosi is featured at the beginning and end of the video compilation as she refers to Republicans and the White House as “domestic enemies” and “enemies of the state.”

The most important video of 2020
pic.twitter.com/3nMNlxl5Q8

“We take an oath to protect and defend the Constitution from all enemies, foreign and domestic,” the speaker said at the time.

‘I just don’t even know why there aren’t uprisings all over the country.,’ Pelosi said

“And sadly the domestic enemies to our voting system and our, honoring our Constitution are right [at] 1600 Pennsylvania Avenue with their allies in the Congress of the United States,” said the Democratic leader.

“They’re doing everything they can, suppress the vote, with your actions, scare people, intimidate by saying law enforcement will be there, diminish the role of the postal system in all of this.”

“I just don’t even know why there aren’t uprisings all over the country. And maybe there will be when people realize that this is a policy that they defend.”

“This is as much about public outcry and organizing and mobilizing and applying pressure so that this GOP-led Senate and these governors that continue to carry water for this administration, putting the American people in harm’s way, turning a deaf ear to the needs of our families and our communities — hold them accountable,” Pressley said.

“Make the phone calls, send the emails, show up.”

“You know, there needs to be unrest in the streets for as long as there’s unrest in our lives,” she insisted.

Former Vice President Joe Biden is also featured, saying he would like to physically assault a younger President Donald Trump.

“If we were in high school, I’d take him behind the gym and beat the hell out of him,” Biden said.

Biden promoted and, at best, ignored the left-wing rioting over the course of 2020.

Rep. Maxine Waters (D-CA) also makes an appearance in the video urging supporters to physically harass anyone from the Trump administration.

“If you see anybody from that cabinet in a restaurant, in a department store, at a gasoline station, you get out, and you create a crowd, and you push back on them, and you tell them they’re not welcome anymore, anywhere.”