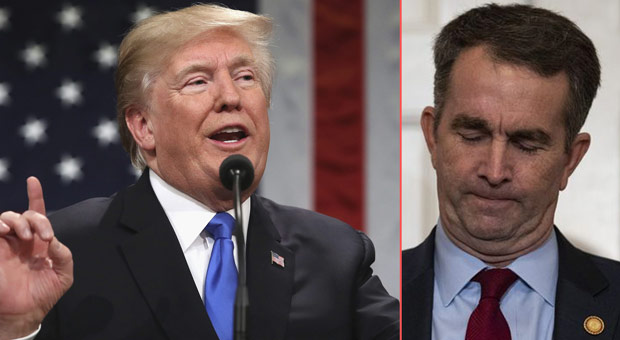 President Donald Trump has sent a clear message to lawmakers in the Democrat-controlled state of Virginia, warning that he will not allow them to undermine the Second Amendment rights of American citizens while he’s in office.

Speaking during an interview with Fox News Wednesday, President Trump warned Democrats that a gun grab “will never happen as long as I’m here.”

In conjunction with the Democrats who control the state’s executive offices, Dem officials immediately pushed forward with plans to legislatively impose strict gun control measures upon law-abiding gun-owners in the state.

Virginians have been rising up in response, and on Monday, tens of thousands of gun owners and Second Amendment supporters marched on the state capitol in Richmond in opposition to the coming gun-control measures.

President Trump spoke briefly about the gun-grabbing attempts during a wide-ranging interview with Fox Business anchor Maria Bartiromo, making it clear that he stands alongside gun owners in support of the Second Amendment.

Trump’s remarks about Virginia came after a question about efforts by Democrats in New York to release a substantial number of convicted criminals from prison in addition to a controversial bail reform measure, according to Western Journal.

Speaking while in Davos, Switzerland, for the World Economic Forum, Trump simply dismissed what the New York Democrats were doing as “crazy” before shifting his focus to Virginia.

“I think it’s crazy, and I think Virginia is crazy,” the president said.

“They want to take away the guns in Virginia.

“You have a governor that’s — I just can’t believe it — but Virginia’s very much in play.

“I think we’re going to win the state of Virginia.”

“Frankly, they’d get rid of it. I watched [Virginia Gov. Ralph Northam] on an interview.

“He would get rid of the Second Amendment if it was up to him, and you have many Democrats saying the same thing.”

“They’re saying it quietly, but if they win these elections, they’re going to try and get rid of the Second Amendment,” he added.

“It will never happen as long as I’m here.”

This actually wasn’t the first time that Trump had addressed the situation in Virginia and the growing threat posed by anti-gun Democrats to the sacred constitutional rights of law-abiding citizens in the state.

On Monday, tens of thousands of gun owners rallied peacefully in Richmond in spite of overblown fear-mongering from the media about the potential for violent conflict.

Northam had enacted a ban on firearms on the Capitol Square in the days leading up to the rally.

As the rally was taking place, Trump criticized Virginia Democrats on Twitter.

“The Democrat Party in the Great Commonwealth of Virginia are working hard to take away your 2nd Amendment rights. This is just the beginning. Don’t let it happen, VOTE REPUBLICAN in 2020!” he tweeted.

The Democrat Party in the Great Commonwealth of Virginia are working hard to take away your 2nd Amendment rights. This is just the beginning. Don’t let it happen, VOTE REPUBLICAN in 2020!

A few hours later, following the conclusion of the rally (which featured no violence of any kind), the president also tweeted, “I will NEVER allow our great Second Amendment to go unprotected, not even a little bit!”

I will NEVER allow our great Second Amendment to go unprotected, not even a little bit!

Trump understands that the Second Amendment is sacrosanct.

He has made it crystal clear yet again that he won’t stand idly by while a fundamental right of the people is trampled on and infringed by authoritarian tyrants in the Democratic Party.

Piers Morgan: Trump Is “Laughing His Way Back to the White House”