Schiff: ‘We May All Be Moving to Canada Soon’ 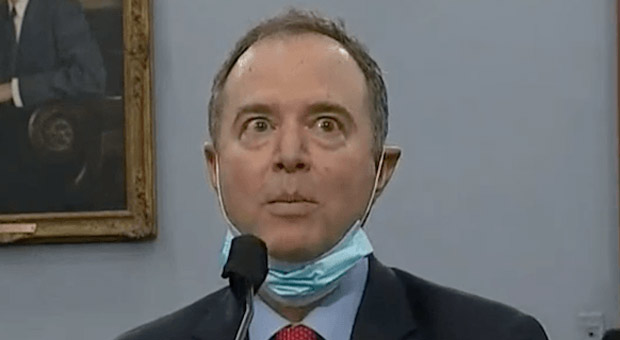 Anti-Trump Democrat Rep. Adam Schiff (D-CA) has warned that “we may all be moving to Canada soon.”

House Intelligence Committee Chairman Schiff made the remark during a Monday press conference while addressing the subject of social media and election meddling.

As the moderator called on Canadian Member of Parliament Dominic LeBlanc to speak, Schiff reportedly commented “we may all be moving to Canada soon.”

Elsewhere the forum, Schiff took aim at Facebook and Twitter by suggesting their platforms are “being used” for election meddling.

He argued that the social media giants are not doing enough to combat the issue due to “economic incentives.”

Adam Schiff suggested that ‘we’ might be soon leaving America

Schiff stated that he gets the “sense that there’s something going on at Twitter, that maybe we’ve reached the last straw for what the management of Twitter can take, in terms of what they’re seeing how their platform is being used.”

Turning his attention to Facebook specifically, the California lawmaker said the tech giant will “need to be pulled and dragged into this era of corporate responsibility.”

“The economic incentives are simply too powerful for the continuation of the status quo,” he determined.

“I, until proven otherwise, have the sense with respect to Google-YouTube that their strategy is to avoid the scrutiny of the other platforms and disclose as little as possible,” he continued.

“It’s not unlike the — although I’m sure they won’t appreciate this analogy — the president’s view that if you don’t test it, there is no virus.

“If they don’t discuss it, if they don’t reveal it, there is no problem, and so nothing I guess from the hearing shook those impressions, but time will tell.”

Schiff’s comment regarding Canada is reminiscent of pledges made by a host of liberal Hollywood celebrities, who promised and copped out of moving north if then-candidate Donald Trump won the 2016 presidential election.

Girls creator Lena Dunham was among those stars.

Dunham once declared there was a “100 percent” chance that she would move to Canada if Trump won the White House.

In October 2018, actress Barbra Streisand claimed she was considering moving to Canada if the House Republicans kept their majority in the midterm election.