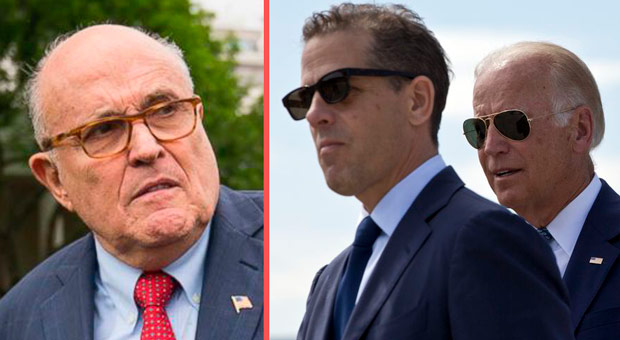 Rudy Giuliani has vowed to release “evidence” that, he says, proves former Vice President Joe Biden and his son, Hunter Biden, “made millions” from “selling” the Obama Administration to Ukraine.

Former New York City Mayor Giuliani said on Twitter that he was handing over the “evidence about the extent of Dem corruption” to Fox News and urged his followers to keep an eye out for the news “about noon” on Friday.

On Thursday, Giuliani also posted on Twitter saying that he was planning to release evidence that Bidens “made millions selling public office.”

“Everything I tried to tell the press last March is now coming out, and more,” President Donald Trump’s personal attorney tweeted.

“I will now start to reveal the evidence directly to you, the People,” Giuliani added.

“The Biden Family Enterprise made millions by selling public office. Then when Joe was Obama’s Point Man, they ALL made millions.”

Giuliani traveled to Ukraine in December and has said since that time he would release a report on what he found there, according to the Daily Mail.

The former New York City mayor has claimed – but has yet to offer proof – that Hunter Biden made millions from his work on the board of Burisma, a Ukrainian gas company, and from advising a Chinese hedge fund.

Giuliani, one of Donald Trump’s personal attorneys, is not serving on the president’s defense team during the impeachment trial in the Senate.

He lobbied to be a part of it but the former New York City mayor is also a potential witness in the case should the Senate vote to call additional ones.

“I’d love to have Rudy on my team,” Trump said at a press conference in Davos, Switzerland, this week.

“But, you know, he could be a witness at some point, if this whole sham continues.”

Ready to do Fox and Friends and give them some new evidence about the extent of Dem corruption. Look for link on Twitter at or about noon today.

The president has been supportive of his lawyer and his work, however.

“He says he has a lot of good information,” Trump said in December about Giuliani’s trip.

“I hear he has found plenty.”

The former mayor has played a controversial role in the Trump administration.

Officially he is not part of the government.

But being the president’s private lawyer and his work in Ukraine – he was part of a shadow group of advisers known as the three amigos – has made him ground central in the impeachment inquiry.

Several administration officials have been said to be frustrated with Giuliani, who has made frequent television appearances to peddle his theories about the Bidens and Ukraine.

Trump is said to appreciate Giuliani’s robust defense of him.

The president frequently blasts Hunter Biden and his work in Ukraine and China at his campaign rallies.

Hunter Biden sat on the board of BHR, a Chinese equity firm, that was trying to raise a $1.5 billion financial stake.

But he would not say how much money he has made with any of his work.

“One thing that I don’t have to do is sit here and open my kimono as it relates to how much money I make or make or did or didn’t. But it’s all been reported.”

Joe and Hunter Biden have been at the heart of the Ukraine corruption scandal, central to the impeachment case

Hunter Biden also said he never discussed his work in Ukraine or China with his father.

Joe Biden – when he was vice president – pushed Ukraine to fire a prosecutor who was investigating the company Hunter Biden worked with.

Joe Biden said he was following international and Obama administration policy in regards to the prosecutor, whom there were concerns was not doing enough to fight corruption

Neither Biden has been charged with any wrongdoing.

Giuliani also believes it was Ukraine – and not Russia – that interfered in the 2016 election.

BREAKING: New Emerson Poll Has Trump and Biden Tied, Dem Field Down to a 2 Person Race