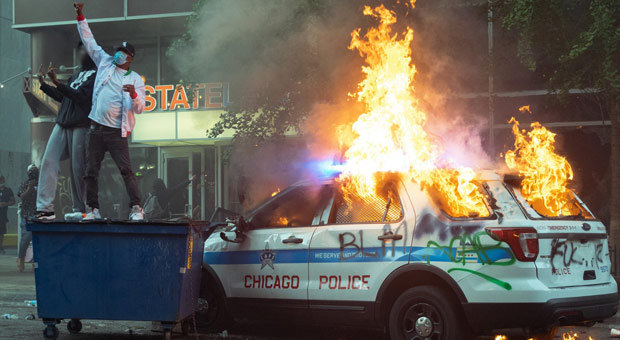 Republicans are calling on the Department of Justice (DOJ) to launch a federal investigation to find out who is funding the violent Black Lives Matter riots that are ravaging cities across America.

Lawmakers are echoing the calls made by Sen. Rand Paul (R-KY) last week.

Paul said he wants the FBI to investigate allegations that violent BLM and Antifa mobs are being “paid” to incite riots in America’s city streets.

The senator says he believes “crazed mobs” are being “hired” to travel from out of town and across state lines to instigate unrest and rioting, as Neon Nettle previously reported.

Paul made the calls during a Friday interview with Fox News’s “Fox & Friends” after he was surrounded by an “unhinged mob” of BLM protesters as he left the RNC event at the White House with his wife and friends on Thursday night.

Rep. Ken Buck (R-CO) backed Paul’s push for a DOJ investigation into who could be bankrolling the riots erupting in Democrat-controlled cities.

Sen. Rand Paul (R-KY) has called on the FBI to investigate whether mobs are being ‘paid’ to incite riots in America’s city streets

“The Justice Department needs to open an investigation into who is funding these violent riots,” Buck tweeted Sunday.

Buck made the call again on Monday:

Big city mayors have been unable to govern and control the violence on their streets. Americans are sick and tired of it.

We need to take action—@TheJusticeDept must investigate and prosecute the individuals and groups who are organizing and funding these destructive riots. pic.twitter.com/CW9Ns5spDe

In response to news of the Pauls’ ordeal, Buck tweeted Friday: “Where is the outrage?”

If the Tea Party threatened a Democratic Senator and assaulted police officers like this, it would be leading CNN. Every conservative politician would be asked to condemn it.

Where is the outrage? https://t.co/2kjIQLjXBy

Paul and his wife, Kelley, said they still didn’t feel safe even after making it to their hotel, the Kentucky senator wrote in a Saturday opinion piece published by Fox News.

“After we got back to our hotel room and some safety we heard something frightening,” Paul recounted.

“The ‘protesters’ were staying on our floor — including the room next door to us.

“They were talking about their mob activities and even saying they thought we were here on this floor,” he said.

“We had to develop a 3 a.m. plan with the Capitol Police to get to safety.

“My question is: Who are these people? Who paid for their hotel rooms? Who flew them in?

“Law enforcement needs to look at the funding of violent criminal activity like this,” Paul wrote.

“And national Democrats need to confront it.

“It’s not about Black lives or any lives; it’s about anarchy and destruction.

“The American people are starting to catch on and grow tired of it.”

Sen. Rand Paul and his wife were mobbed by a large group of BLM leftists last week

California law defines looting as taking advantage of a state of emergency to commit “burglary, grand theft or petty theft” and a looting charge “essentially increases the severity of a theft or burglary charge,” according to RedState.

“Was the theft committed for financial gain or personal need?” is one of the points in Becton’s “Looting Guidelines” that officers are asked to consider.

RedState also reported that Becton’s deputy district attorney Nichelle Holmes sent out social media posts saying “We want more than a citation for vandalism” for the couple who painted over a “Black Lives Matter” mural in her jurisdiction.

The office subsequently charged the couple with a “hate crime.”

BREAKING: Debate Moderators for All 3 Trump vs. Biden Debates Announced