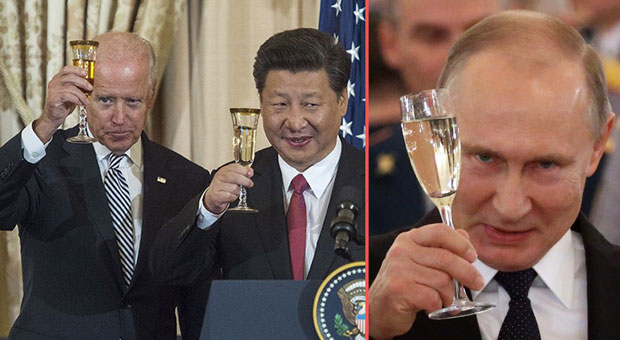 Putin praised former Vice President Biden during a new wide-ranging interview with the Rossiya TV channel that aired this week.

While discussing the upcoming U.S. election in November, Putin attempted to mark a positive resemblance between Biden and the Democrats and Soviet communists.

He told the Russian public that the Democratic Party has “shared values” with Communism.

The Kremlin would be open to working with whoever sits in the Oval Office in 2021, Putin insisted, despite claims in the U.S. that Russia is trying to interfere with the elections.

Throughout the interview, however, Putin spoke favorably about Biden, who he linked to communist ideology.

While Putin—a former party member, KGB colonel, and intelligence operative—made the comparison in positive terms, his comment lines up with GOP criticisms of the Biden-Kamala Harris ticket, according to Newsweek.

Trump and his allies have warned the American public that their opponents are proposing a far-left, extremist platform that’s dictated by the radical-left wing of the Democratic Party.

“And it was from the social democratic environment that the Communist Party evolved.”

“After all, I was a member of the Soviet Communist Party for nearly 20 years” Putin added.

“I was a rank-and-file member, but it can be said that I believed in the party’s ideas.

“I still like many of these left-wing values: Equality and fraternity.

“What is bad about them? In fact, they are akin to Christian values.”

“Yes, they are difficult to implement, but they are very attractive, nevertheless.

“In other words, this can be seen as an ideological basis for developing contacts with the Democratic representative.”

American racial inequality will play a central role in the coming election.

Trump and his allies have repeatedly called out the Black Lives Matter for using racial issues to manipulate the public to push a radical-left agenda.

Putin said black Americans “constitute a stable electorate” in favor of the Democrats.

“The Soviet Union also supported the African Americans’ movement for their legitimate rights,” he said.

“Back in the 1930s, Communist International leaders wrote that both black and white workers had a common enemy–imperialism and capitalism.

“They also wrote that these people could become the most effective group in the future revolutionary battle.”

“So, this is something that can be seen, to a degree, as common values, if not a unifying agent for us,” Putin said.

“People of my generation remember a time when huge portraits of Angela Davis, a member of the U.S. Communist Party and an ardent fighter for the rights of African Americans, were on view around the Soviet Union.”

Putin also pointed out to Rossiya that he hopes to work with a Biden administration on a nuclear arms deal.

“Candidate Biden has said openly that he was ready to extend the New START or to sign a new strategic offensive reductions treaty,” Putin said, referring to the landmark nuclear arms control accord that is due to lapse next year.

“This is already a very significant element of our potential future cooperation.”

The Trump administration has thus far refused offers to extend the deal.

“I would like to repeat what I have said more than once before,” Putin concluded.

“We will work with any future president of the United States, the one whom the American people give their vote of confidence.”

[RELATED] Pope Francis Pushes Communism: ‘For the Good of All’