President Trump: The Cross is 'a Powerful Reminder of the Meaning of Christmas'

Trump highlights the importance of the Christian symbol 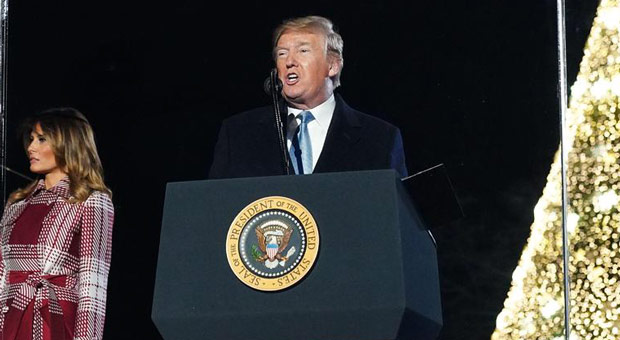 President Donald Trump gave a speech that reminds people everywhere of the true meaning of Christmas.

Joined by First Lady Melania Trump, the president addressed a large crowd earlier this month, who had gathered on the Ellipse for the lighting of the National Christmas Tree.

During his speech, President Trump drew a connection between Christ’s humble birth and his cross.

“Later that night, African-American community centers held an outdoor worship service on these grounds, and during that service, the Washington Monument was illuminated with a beautiful cross, a powerful reminder of the meaning of Christmas.”

SCROLL DOWN FOR VIDEO

“More than two thousand years ago, a brilliant star shown in the east,” he continued.

“Wise men traveled far and they came and they stood under the star where they found the Holy Family, in Bethlehem.

“As the Bible tells us when the wise men had come into the house, they saw the young child with Mary His mother, and fell down and worshipped Him.”

“Christians give thanks that the Son of God came into the world to save humanity,” he added.

“Jesus Christ inspires us to love one another with hearts full of generosity and grace.”

In September, President Trump lifted an Obama-era ban on Bibles and Christmas trees from veterans’ hospitals

“At Christmas we remember this eternal truth: Every person is a beloved child of God.

“As one grateful nation we praise the joy of family, the blessings of freedom, and the miracle of Christmas.

“On behalf of Melania and our entire family, Merry Christmas, and God bless you all.”

In September, Trump Administration lifted an Obama-era ban on religious symbols, such as Bibles and Christmas trees, from veterans’ hospitals.

The ban was part of a directive to “protect religious liberty” for veterans and their families by ensuring so-called “inclusivity” and “nondiscrimination.”

These directives permitting religious literature, symbols, and displays at VA facilities have now been revised by the U.S. Department of Veterans Affairs (VA).

Following the revisions, Bibles will now be allowed in the facilities again and the right to enjoy festive celebrations, such as Christmas carol singing, has now been restored.

The move aims to simplify and clarify the department’s policies governing religious symbols, and spiritual and pastoral care.

The rules have been interpreted inconsistently at various VA facilities in recent years, resulting in unfortunate incidents that interrupted certain Christian displays by banning Christmas carols and trees and removing all Bibles.

Trump admin officials have now updated the policies to actually protect the religious freedom of veterans and their families.