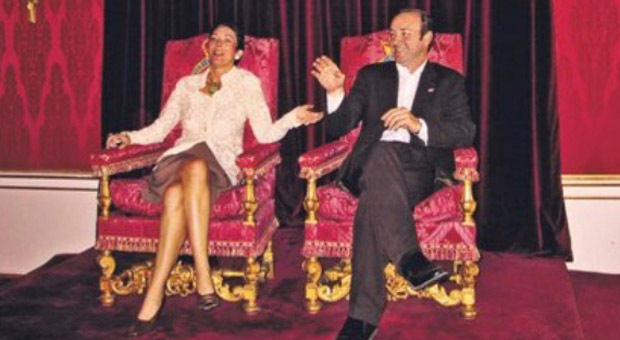 Maxwell was arrested by U.S. authorities this week over her alleged role in Epstein’s child sex slavery operation.

The newly emerged image shows Maxwell sitting in the throne alongside disgraced actor Kevin Spacey during a private tour of the palace organized by Britain’s Prince Andrew, it has been reported.

The photo was obtained by British newspaper The Telegraph and was reportedly taken in 2002.

The paper said that Maxwell was on a private tour organized by Andrew, the Duke of York, for former US President Bill Clinton, who isn’t pictured.

It emerged after Maxwell was arrested in New Hampshire on Thursday over allegations she helped disgraced financier Epstein, her former boyfriend, “identify, befriend, and groom” girls, including one as young as 14.

The Telegraph said it was not thought that Epstein was on the palace tour when the picture was taken.

According to the paper’s source, Spacey – whose career was left in tatters after he was accused of making unwanted sexual advances to a 14-year-old actor – was a guest of Mr. Clinton’s.

Maxwell came along as a friend of the Duke.

The Spacey charges were later dropped.

“They were larking about on the thrones, doing regal waves,” said the source.

“Ghislaine sat on the Queen’s throne with Spacey pretending to be the Duke of Edinburgh.

“No one can recall if Prince Andrew was actually in the throne room at the time but he was in charge of the visit.”

It is thought the photo was taken after Clinton arrived in London in September 2002 en route to the Labour Party conference in Blackpool where he was the guest of honor.

Spacey went with him to Blackpool.

Before arriving in the UK, Mr. Clinton and Spacey spent seven days on a tour of Africa with Epstein on his private jet.

It is not thought that Epstein was on the Palace tour although he previously visited Sandringham and Windsor Castle along with Maxwell as a guest of the Duke.

Maxwell was also on the flight to Africa, part of a humanitarian trip for the Clinton Foundation.

Meanwhile, the duke has been urged to provide information in relation to the investigation after his friend Maxwell appeared in court accused of facilitating Epstein’s sexual exploitation of underage girls.

Audrey Strauss, acting US attorney for the southern district of New York, told a press conference that authorities would “welcome” a statement from the duke.

Virginia Roberts (center) says she was trafficked by Epstein and Maxwell (right) to Prince Andrew (left), who raped her after this photo was taken

Lawyers for some of Epstein’s alleged victims on Friday added pressure on Andrew to speak about his friendship with Epstein, who was found dead in prison last year while awaiting trial on child sex trafficking and conspiracy charges.

At a brief hearing on Thursday, a judge ordered Maxwell to remain in custody while she is transferred to New York for a detention hearing.

Ms. Strauss claimed that the socialite had helped Epstein to exploit underage girls and “in some cases” would participate in the abuse herself.

Four of the six charges cover Maxwell’s dealings with Epstein from 1994 to 1997, when she was in an “intimate relationship” with him, according to the indictment.

According to the indictment, three unnamed minors were allegedly “induced and enticed” by Maxwell, who “facilitated” for them to be groomed by Epstein at properties he owned.

One of Epstein’s alleged victims, Virginia Roberts, now Virginia Giuffre, claims she was forced to have sex with Prince Andrew at the Maxwell’s London townhouse in 2001 when she was just 17-years-old.

Roberts says she was taken as Epstein’s sex slave when she was just 15 and trafficked to “older men.”

Maxwell, who has known Andrew since university and introduced him to Epstein, features in the background of a picture which apparently shows the duke with his arm around Ms. Giuffre.

Ms. Giuffre has claimed she was trafficked by Epstein and alleges the duke raped her on three separate occasions, including when she was 17, still a minor under US law.

Andrew categorically denies he had any form of sexual contact or relationship with Ms. Giuffre.

WATCH: Trump at Mount Rushmore “We will never let them rip America’s heroes from our monuments or from our hearts”