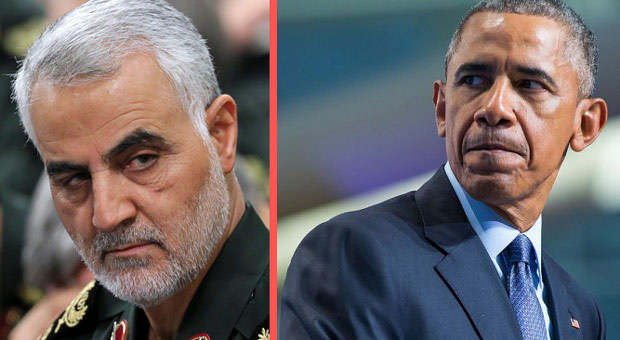 The Obama Administration removed Soleimani from a list of Iranian outlaws, along with other leaders of Iran’s Revolutionary Guards, according to a 2015 article in The Telegraph.

In the July ’15 report by the left-leaning newspaper, Defence Editor Con Coughlin declared that Iranian General Soleimani “fully deserves his reputation as one of the world’s leading terrorist masterminds.”

For over a decade, he has been the driving force behind an array of Iranian-sponsored terrorist groups, from Hizbollah to Hamas, which have orchestrated a reign of terror throughout the Middle East, according to the report.

Found buried on page 86 of the annex of President Obama’s “historic” deal with Iran, Soleimani was granted amnesty and was taken off the list of proscribed Iranians – together with a number of senior members of the Islamic Republic’s Revolutionary Guards.

In addition to giving in to the Iranian regime with the agreement granted in 2015, Obama continued to help it, trying to gain access to the United States financial system, thus circumventing the continuing sanctions on the country.

Iran has vowed bloody revenge for the death of Iranian terrorist Gen. Soleimani

According to a June 7, 2018 report by the chairman of the Permanent Subcommittee on Investigations (PSI), Sen. Rob Portman (R-OH), “Obama administration secretly granted a specific license authorizing the conversion of Iranian assets worth billions of U.S. dollars using the U.S. financial system.”

The transactions did not take place because the U.S. banks refused to complete the requests, preferring to respect the law.

A very significant part of the economic liquidity that Iran achieved with the nuclear deal signed with Obama was invested in its uranium enrichment program and in financing terrorist groups in the Middle East and Syria, a Wall Street Journal article stated.

“Obama sought to win over the Tehran regime by avoiding confrontation and letting Iran get away with it in Syria and elsewhere,” the Wall Street Journal said.

“His goal above all was the nuclear deal.”

Politico’s 2008 investigation found the Drug Enforcement Administration (DEA) had evidence that Hezbollah was a military and political organization, focused on the Middle East.

It was also exposed as an international criminal syndicate that collected $1 billion a year from drug and arms trafficking, money laundering, and other criminal activities, with state support from Iran.

But when intelligence officials sought approval for some major investigations, prosecutions, arrests, and financial sanctions, those in the Obama administration’s Justice and Treasury departments delayed, hindered or denied their requests for eight years.

READ THE FULL TEXT OF THE IRAN DEAL BELOW:

On January 3, Trump said the decision to annihilate Iran’s top military commander, Soleimani, was in line with the current administration policy.

“As president, my highest and most solemn duty is the defense of our nation and its citizens,” the president said.

President Trump described the successful execution as “a flawless precision strike that killed the number-one terrorist anywhere in the world, Qassem Soleimani,” according to the White House.

GOP Senate moderates refuse to side with Democrats over Bolton testimony