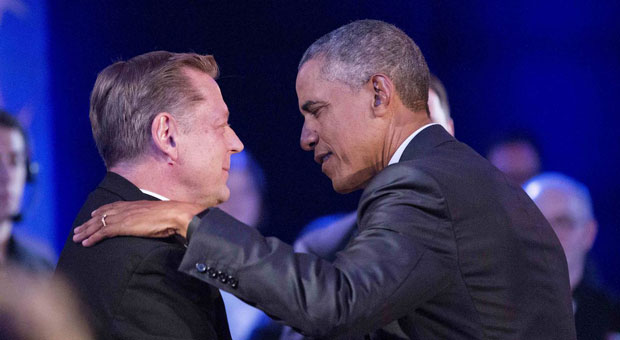 71-year-old Pfleger has a colorful record of left-wing partisan Democrat advocacy and associations.

Left-wing Democrat Catholic priest, Father Michael Pfleger, who was praised by former President Barack Obama, has been removed from his role heading Saint Sabina Church in Chicago amid allegations of a sexual assault against a minor.

I write to share some difficult news about your senior pastor, Father Michael Pfleger. In keeping with our child protection policies, I have asked Father Pfleger to step aside from ministry following receipt by the Archdiocese of Chicago’s Office for Child Abuse Investigations and Review of an allegation of sexual abuse of a minor more than 40 years ago.

But the letter failed to provided details of the abuse or identify the sex of the allegedly abused minor.

71-year-old Pfleger has a colorful record of left-wing partisan Democrat advocacy and associations.

In 1995, Pfleger endorsed and donated to former President Barack Obama’s first campaign for the Illinois Senate.

In 1995, Pfleger endorsed and donated to former President Barack Obama’s first campaign for the Illinois Senate.

Pfleger’s support of the former president was included as part of Obama’s first presidential campaign.

Pfleger was credited by Obama for helped shape his “moral compass.”

The former President also described Pfleger as a “dear friend.”

Pfleger advocates against Second Amendment rights and derided America as pathologized by “racism.”

Photos of Pfleger show him attending leftist events, including one of him wearing a “BLACK LIVES MATTER” t-shirt.

Other photographs show him speaking at a rally against firearms ownership.

“I don’t think there is any group or religion in America that has done more for the African-American male than the Nation of Islam.”

“I feel the real problem is, America doesn’t know how to handle Louis Farrakhan or the truth.”

Pfleger invited Louis Farrakhan to speak at an “anti-violence rally” in Chicago and invited him to speak at Saint Sabina in 2019.

Joe Biden’s election not only allows us to turn away from the lying, demonizing, separating of Families and fueling the flames of hate and racism, but now gives us the opportunity to Heal a Broken Nation, care for the Poor and disenfranchised & attack Racism.. now our work begins

I think we keep wanting to believe America is better than she is, America was Birthed in Genocide, Built on Slavery and committed to upholding supremacy…When someone shows you who they are, Believe them! The closeness of this race shows us again the DNA of this Country..

We’ve spent time, energy and millions seeking to defeat Covid but have nearly ignored the Virus of Violence.. Is it because Covid effects all people and the Violence primarily effects Poor, Black and Brown ?

Media outlets like ABC, NBC, and the Chicago Sun-Times failed to acknowledge Pfleger’s politics reporting on the priest’s departure.

Video of Protesters Gathered Outside the Home of Senator Hawley