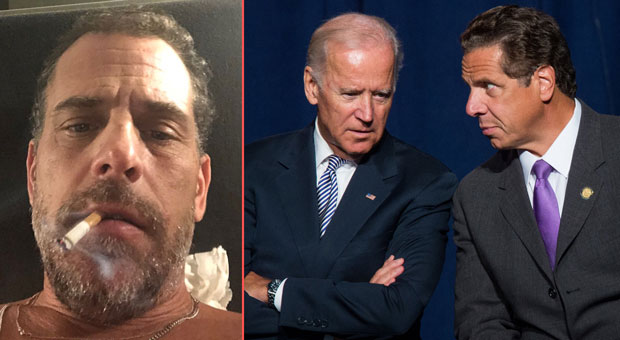 The Bidens identify the top Dems while speaking with a partner brought on to aid in a business arrangement with a now-bankrupt Chinese energy company.

Foreign business dealings by the Biden family, that leveraged Joe’s influence while in office as vice president, have rocked Washington D.C. since the New York Post published emails last week alleged to have come from Hunter’s laptop.

Biden denied taking money from foreign actors on as President Trump repeatedly had him up against the ropes over his son Hunter’s “laptop from hell.”

One of Hunter’s alleged former business partners, Tony Bobulinski — the partner copied on the email of “contacts” — has testified to the veracity of at least one email reported by the Post.

He also claimed that Hunter’s father was in on at least one of his son’s overseas business deals.

The email between Jim Biden, Hunter, Bobulinski, and a man named Rob Walker of “contacts” is unrelated to the batch of emails found on Hunter’s purported laptop, according to Fox News, which first obtained the email.

It is unknown whether anyone on the list was ever contacted or even knew about the Bidens’ reported business dealings with the Chinese company CEFC China Energy Co., according to The Daily Wire.

The email can be read here.

Bobulinski gave a statement to the Post published early on Thursday morning testifying to the veracity of one email exchange from Hunter’s alleged laptop outlining a plan to split the equity in a new business venture with a former executive at CEFC.

The email showed “H,” a reference to Hunter, getting 20% and holding 10% for “the big guy,” who Bobulinski identified as Joe Biden.

Joe Biden’s running mate, Sen. Kamala Harris, is named as one of the ‘key domestic contacts’

What I am outlining is fact. I know it is fact because I lived it.

I am the CEO of Sinohawk Holdings which was a partnership between the Chinese operating through CEFC/Chairman Ye and the Biden family.

I was brought into the company to be the CEO by James Gilliar and Hunter Biden.

The reference to “the Big Guy” in the much publicized May 13, 2017 email is in fact a reference to Joe Biden.

The other “JB” referenced in that email is Jim Biden, Joe’s brother.

Hunter Biden called his dad ‘the Big Guy’ or ‘my Chairman,’ and frequently referenced asking him for his sign-off or advice on various potential deals that we were discussing.

I’ve seen firsthand that that’s not true, because it wasn’t just Hunter’s business, they said they were putting the Biden family name and its legacy on the line.

I realized the Chinese were not really focused on a healthy financial ROI.

They were looking at this as a political or influence investment.

Once I realized that Hunter wanted to use the company as his personal piggy bank by just taking money out of it as soon as it came from the Chinese, I took steps to prevent that from happening.