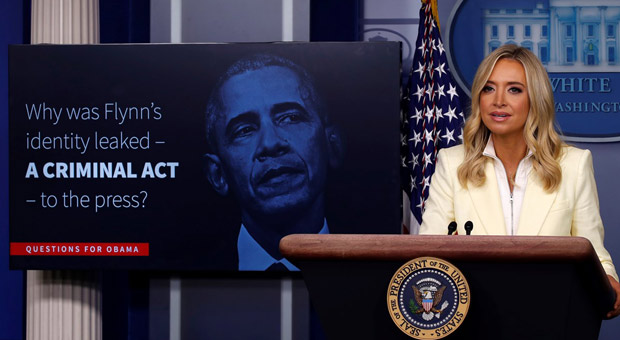 White House Press Secretary Kayleigh McEnany schooled the media on Obamagate during a Friday presser, during which she used a slide show to expose the Obama Administration’s “unmasking” of Trump advisor Michael Flynn.

Someone in Obama’s inner-circle appeared to have then illegally leaked Flynn’s name to the media.

“I laid out a series of questions that any good journalist would want to answer about why people were unmasked and all sorts of questions, and I just wanted to follow up with you guys on that,” McEnany told members of the press.

“Did anyone take it upon themselves to pose any questions about Michael Flynn and unmasking to President Obama’s spokesperson?” McEnany asked.

“Oh, not a single journalist has posed that question?” McEnany continued, as ABC reporter Jonathan Karl tried to interrupt.

“Okay, so I would like to lay out a series of questions and perhaps if I write them out in a slide format, maybe we’re visual learners, and you guys will follow up with journalistic curiosity.”

“So, number one, why did the Obama administration use opposition research funded by a political organization and filled with foreign dirt to surveil members of the Trump campaign?” McEnany said.

“Number two, why was Lieutenant General Michael Flynn unmasked, not by the Intel community entirely, but by Obama’s chief of staff?

“By the former Vice President Joe Biden? By Susan Rice? By the Treasury Secretary?

“I mean, this is extraordinary and, you know, if it were political appointees in the Trump administration, I can guarantee you, I’d have questions in my inbox right now, but apparently Obama’s spokesperson does not.”

“Why was Flynn’s identity leaked in a criminal act?” McEnany continued.

“It is a criminal act to leak the identity of Michael Flynn to the press, but it happened.

“Where are the questions to Obama’s spokesperson?

“Because my team would be running around this building should this have happened under the Trump administration.”

“Why did the DOJ’s Sally Yates learn about the unmasking from President Obama?” McEnany continued.

“So much for going ‘by the book’ as Susan Rice said three times, thou doth protest too much, Susan Rice.

“And then finally, question number five, why did James Clapper, John Brennan, Samantha Power, and Susan Rice privately admit under oath they had no evidence of collusion while saying the opposite publicly?” McEnany concluded.

“It’s a long weekend, you guys have three days to follow up on those questions, and I certainly hope the next time I ask some hands go up because Obama’s spokesperson should be asked those questions because President Trump’s spokespeople certainly would be.”

.@PressSec @kayleighmcenany brought visual aids today to assist the White House Press corps in what questions they should be asking Barack Obama about why General Flynn was unmasked.