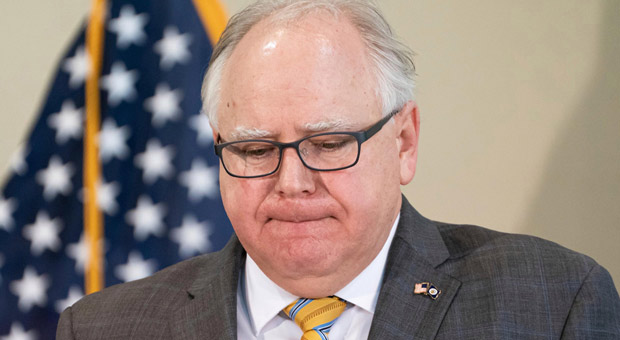 Minnesota Gov. Tim Walz has asked Trump to declare a disaster in the state

Liberal Minnesota Gov. Tim Walz has asked President Donald Trump to help his state by declaring a disaster in the wake of the recent George Floyd riots that have caused an unprecedented $500 million in damages.

Gov. Walz asked President Trump for federal assistance due to “extensive fire damage” and other destruction that occurred during the unrest that followed Floyd’s death in Minneapolis police custody on Memorial Day.

“We need to come together to ensure Minnesotans who were victims of this destruction have access to critical infrastructure they need so they can go to the grocery store, pick up their medication, and live their lives,” Walz said in a Thursday statement.

“Together, we will rebuild,” he added.

“We’re asking our federal partners to step up and help our communities recover,” the governor said.

Walz’s office estimates the cost of the damage to more than 1,500 businesses in Minneapolis and St. Paul at over $500 million, according to Fox News.

Fires caused at least $15 million in damages to public infrastructure that Walz’s office said it could be eligible to receive reimbursement from the federal government.

“We are committed to helping our communities rebuild, but we can’t do this on our own,” said Lt. Gov. Peggy Flanagan.

“While state, tribal, and local budgets are stretched thin by COVID-19, we need everyone to step up, including the federal government, to restore safety and critical infrastructure to our communities.”

Over 1,500 businesses in Minneapolis and St. Paul were damaged or completely destroyed during the riots

The governor’s office said it has fully mobilized the Minnesota National Guard to restore order after protests over Floyd’s death devolved into chaos.

It was the first time such a move was taken since World War II.

Looting and rioting at times left businesses and vehicles engulfed in flames and the police department’s Third Precinct building torched and abandoned.

The violence has subsided, but federal prosecutors have filed a slew of charges against arson suspects.

Authorities are continuing to seek to identify more persons of interest.

Four officers were fired from the Minneapolis Police Department and criminally charged in connection with Floyd’s death.