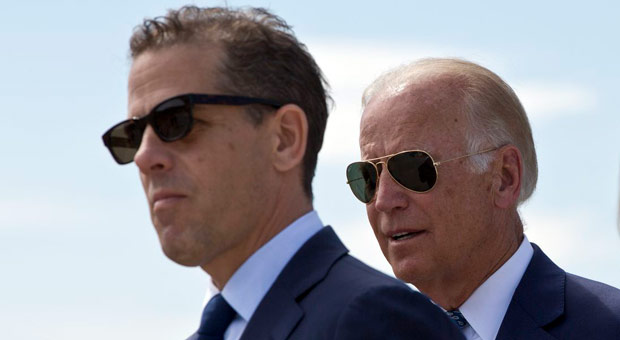 An investigation into the foreign business dealings of Joe Biden’s son, Hunter Biden, has uncovered evidence of “potential criminal financial activity” that has raised “counterintelligence and extortion concerns,” according to the probe’s hotly-anticipated report.

The report on the investigation, conducted by two Republican-controlled Senate committees, was released Wednesday and places fresh scrutiny on the former vice president’s family dealings.

Suspicious financial transactions between Hunter Biden’s firms and Russian and Chinese nationals were flagged by U.S. banks, the investigation found.

A businessman with extensive ties to the Chinese Communist Party was among the transactors raising red flags.

The report asserts that the millions of dollars worth of wire transfers raise concerns about potential conflicts of interest involving Hunter Biden, as well as “criminal financial, counterintelligence and extortion concerns.”

A copy of the report was obtained ahead of its release by The Daily Caller.

The report also states that State Department officials expressed reservations in 2015 and 2016 about Biden’s links to Burisma Holdings, a Ukrainian energy company that has been dogged by bribery allegations.

One official, Amos Hochstein, told the Senate Homeland Security and Senate Finance committees that he said to then-Vice President Joe Biden in October 2015 that Hunter Biden’s position on the board of Burisma “enabled Russian disinformation efforts and risked undermining U.S. policy in Ukraine.”

Hunter Biden, now 50, joined Burisma’s board of directors in April 2014, shortly after his father, Joe Biden, took over as the Obama administration’s chief liaison to Ukraine.

One of the administration’s goals was to help Ukraine fix its problems with corruption.

But State Department officials questioned whether the younger Biden’s work for Burisma posed a problem because the company’s owner, Mykola Zlochevsky, was under investigation for money laundering and extortion.

George Kent, who served as deputy chief of mission to Ukraine through 2018, testified that Zlochevsky was an “odious” oligarch who likely paid a $7 million bribe to a Ukrainian prosecutor general in December 2014, months after Hunter Biden joined Burisma’s board, according to the report.

Emails cited in the report show that Kent raised Burisma’s issues with corruption to other State Department officials.

Kent also told the committees on July 24, 2020, that he said to Joe Biden’s national security staff in February 2015 that Hunter Biden’s role at Burisma “could create the perception of a conflict of interest.”

Kent told Joe Biden’s staff that “someone needed to talk to Hunter Biden, and he should [step] down from the board of Burisma,” according to the report.

Joe Biden avoided publicly criticizing Burisma or Zlochevsky, and Hunter Biden remained on Burisma’s board until his father announced his presidential campaign in April 2019.

The report says that Burisma paid a consulting firm controlled by Hunter Biden and Devon Archer, his business partner and fellow Burisma director, more than $3.5 million from May 2014 to February 2016.

Burisma sent nine wire transfers from January 2016 to November 2016 totaling $752,054 to Biden’s law firm, Owasco, according to the report.

The report does not produce any direct evidence of wrongdoing on Hunter Biden’s part.

But Republicans say the documents paint a troubling picture of Biden receiving “millions of dollars from foreign sources as a result of business relationships that he built during the period when his father was vice president of the United States and after.”

The report says that several transactions involving Biden-controlled firms were flagged for “potential criminal financial activity,” including wire transfers that Biden sent to his uncle, James Biden, and payments that he received from a mysterious Chinese businessman believed to have ties to the People’s Liberation Army (PLA).

The report focuses on millions of dollars in wire payments that Hunter Biden’s firms received from Ye Jianming, the founder of CEFC China Energy Co., and Gongwen Dong, a U.S.-based associate of Ye’s.

According to Republicans, Ye has “extensive” connections to the Chinese government.

He reportedly served as deputy secretary for the China Association for International Friendly Contacts (CAIFC), a front group for the PLA.

A report from the U.S.-China Economic and Security Review Commission in 2011 said that CAIFC has “dual roles of intelligence collection and conducting People’s Republic of China propaganda.”

The Senate report says that on Aug. 4, 2017, a subsidiary of Ye’s company called CEFC Infrastructure Investment (US) LLC, wired $100,000 to Owasco, the Biden law firm.

A month later, on Sept. 8, 2017, Hunter Biden and Gongwen Dong applied for a $100,000 line of credit under a shell company they formed called Hudson West III LLC, according to the Senate report.

Biden, his uncle James, and James’s wife, Sara Biden, accessed the account through credit cards, and spent $101,291 on what Republicans call “extravagant items,” including plane tickets, hotels, restaurants, and items at Apple stores.

The wires were “identified for potential financial criminal activity,” the report says.

According to the report, CEFC Infrastructure Investment wired $5 million to the bank account for Hudson West III on Aug. 8, 2017.

Of that, nearly $4.8 million was wired to Biden’s law firm over the next year.

The committees relied on confidential Treasury Department records for details about the transactions.

The records are not fully described in the report, but Republicans refer to committee requests for Suspicious Activity Reports (SARs), which banks are required to file with the Treasury Department when they spot suspicious transactions.

The report also flags wire transfers that Biden received from Elena Baturina, a Russian billionaire who was married to Yuri Luzhkov.

Luzhkov served as Moscow’s mayor until his death in 2010.

The report states that Baturina wired $3.5 million on Feb. 14, 2014, to a bank account for Rosemont Seneca Thornton LLC, which Hunter Biden co-founded with Archer, his business partner, the year before.

Baturina transferred another $241,797 to a bank account for Rosemont Seneca Thornton from May-December 2015, according to the report.

“These transactions were identified because of Baturina’s reported criminal activity,” the report states.

The report also refers to potential payments from Biden to women from Russia and Eastern Europe who may have had links to “prostitution or human trafficking ring[s]” in Eastern Europe.

“These foreign nationals have questionable backgrounds that have been identified as being consistent with a range of criminal activities, including but not limited to organized prostitution and/or human trafficking, money laundering, fraud, and embezzlement,” according to the Republicans.

The alleged payments are not detailed in the report.

Joe Biden’s presidential campaign did not respond to an email seeking comment.

Trump’s Oct Surprise? Shakes The Media And Dems…It’s About To Get Juicy!