Harvard Grad Threatens to ‘Stab’ Anyone Who Says ‘All Lives Matter’ 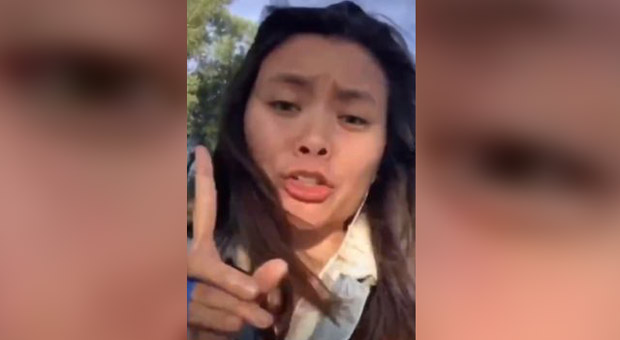 Claira Janover threatened to ‘stab’ anyone who said ‘all lives matter’

A far-left Harvard University graduate has triggered outrage over a TikTok video she made in which she threatened to “stab” anyone who says that “all lives matter.”

Claira Janover, a Black Lives Matter supporter who graduated in May with a degree in government and psychology, went viral after posting a short clip on social media.

In the video, she attacked anyone with “the nerve, the sheer entitled caucasity to say ‘all lives matter.’”

“I’ma stab you,” the Connecticut native warned while zooming in close to her face.

“I’ma stab you, and while you’re struggling and bleeding out, I’ma show you my paper cut and say, ‘My cut matters too,’” she threatened.

Among those who shared the clip was Ann Coulter, who called Janover an “Asian Karen,” while many others called for the student’s arrest.

Claira Janover said she will ‘stab’ anyone with ‘the nerve, the sheer entitled caucasity to say ”all lives matter.”’

“This woman is threatening people, who knows what she is capable of,” someone called Mr. Len wrote in reply.

“Does this not count as violent speech? I guess it only counts when it fits the narrative,” another follower asked on Twitter.

I’m still truly baffled that republicans can’t conceptualize basic hyperbole and comedic analogies….or the fact that I captioned it “this is a joke.”
…the sheer lack of intelligence and insight it takes to spread this and call me a terrorist or believe it was a real threat…

Janover has responded to the backlash by reiterating that it was “clearly” an “analogous joke,” illustrating the way she perceives arguments against the “Black Lives Matter” movement.

“And people are like reporting me for domestic terrorism, tagging the FBI, Harvard, Cambridge police,” she said.

“Apparently I’m threatening the lives of people — unlike cops, obviously.”

Despite the death, rape, expulsion, and firing threats I got today…I am so grateful for everyone who has stood by, supported, & defended me and #BlackLivesMattter. I will not be silenced, shamed, or threatened into silence by bigoted trump fans who don’t understand analogies

She also posted messages regarding the “death, rape, expulsion, and firing threats” she allegedly received but doubled down.

“I will not be silenced, shamed, or threatened into silence by bigoted Trump fans who don’t understand analogies,” she wrote.

“Anyway, so If I get an email from the Department of Homeland Security or I get kicked out of Harvard or I get arrested or whatever,” she wrote, “or I get murdered, according to the many death threats that I’m receiving right now — know that I appreciate you guys standing up for me.”

As of the time of this writing, Harvard University has yet to comment on the matter.

##deloitte I am on the right side of history. ##blacklivesmatter

After getting fired over the comments, Janover later claimed that ‘Trump supporters took my job away from me’

Janover later claimed in a new pair of recordings that she has lost her job over the perceived threats and ensuing furor.

“Standing up for Black Lives Matter put me in a place online to be seen by millions of people,” a teary Claira Janover said in a new video posted Wednesday afternoon.

“The job that I’d worked really hard to get and meant a lot to me has called me and fired me because of everything.”

“Trump supporters took my job away from me,” Janover declares in the tearful video.

WATCH: Texas Lt. Governor lambasts Fauci “He has been wrong every time, on every issue”