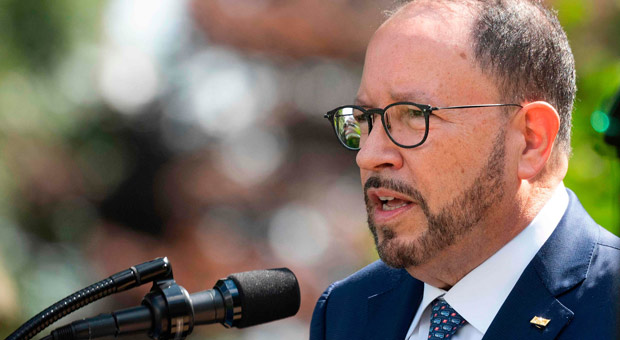 The CEO of Goya Foods has spoken out to condemn the Democrats over their handling of the COVID-19 pandemic, saying the political left has “weaponized” the crisis.

Robert Unanue accused the Democratic Party of using the pandemic to “shut down the economy” for “political gain” over President Donald Trump.

Unanue came out swinging during a Friday interview on Fox News.

“You were called to the White House to talk about the coronavirus and the response and you went, and then political Left tried to cancel you with essentially a boycott,” Fox News host Steve Doocy said.

“But then it turned around, people were supporting you with a buycott and I understand Goya Foods has just finished your biggest, most successful year ever,”  Doocy added.

“You know, the problem is it’s a political year and they weaponized coronavirus, unfortunately, to shut down this economy,” Unanue continued.

“The worst thing we can do is shut down our economy, kill our spirit.

“You know, we need a reason to get up in the morning: God, family, work.

“And they’re taking away our spirit.

“They’re taking away our ability to work.

“They essentially declared martial law, I believe, in this country, shutting everything down.

“It’s the worst thing we could have done just for political gain.

“To shut down this economy for this basically political reasons and, you know, we’re one nation under God.

“We’re not one nation under big media, or under central government.”

“The few controlling the many like a bunch of sheep.”

The move came after her call for a boycott reportedly sparked record sales, according to Unanue.

BERRY: When you see the radical plans like the Green New Deal, when you hear politicians like AOC spouting these things off, agriculture is a major employer in this country but it’s also a major consumer of energy, as you noted earlier. It’s an intensive process for labor and energy. And they are talking about things that would drive the cost of energy through the roof in some cases making it prohibitive for marginal players. How much does that concern you and how much do you feel the need to step up and say, “Hey, guys, you want me to lay off these thousands of employees because that’s what would have to happen?”

UNANUE: You know, communism works until you run out of other people’s money to spend. We’re not going to be able to do that. It’s interesting that AOC was one of the first people to step in line to boycott Goya; go against her own people, as supposedly a Puerto Rican woman, to go against people of her own Latin culture. She’s naïve. To some extent I can understand AOC; she’s young; she’s naïve; she doesn’t get it. But you’ve got someone like (Bernie) Sanders, who’s older than us, older than me, and he still doesn’t get it.

We still have to chat with AOC; I love her. She was actually our Employee of the Month; I don’t know if you know about this, but when she boycotted us, our sales actually increased 1,000%. So we gave her an honorary — we never were able to hand it to her but she got Employee of the Month for bringing attention to GOYA and our adobo. Actually our sales of adobo did very well after she said “Make your own Adobo.”

Bashing, mocking the [scare quote] right [/scare quote] to call election rigged, and commission to REIN IN the press

AOC blasts lawmakers sympathetic to those who flew Confederate flags “the Confederacy were a band of enemies and traitors to the U.S.”