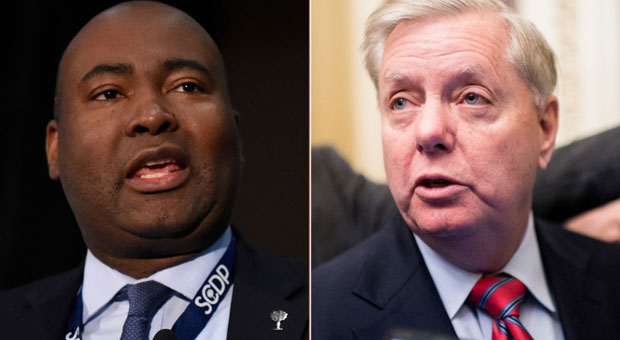 Democrat Jaime Harrison’s unsuccessful bid to unseat Sen. Lindsey Graham (R-SC) cost his party $104.1 million, making it the most expensive loss in the history of the U.S. Senate.

Fundraising records were shattered by Harrison as Democrats poured cash into the race as they aimed to punished Graham for confirming conservative Supreme Court justices.

Harrison announced a record-breaking fundraising haul of $57 million on October 11 for the third quarter of the election cycle. The previous quarterly record — $38 million — was held by former Texas Rep. Beto O’Rourke in his losing 2018 Senate bid against Republican Sen. Ted Cruz.

Harrison has also now both raised and spent more than $100 million overall, by far the most of any Senate candidate in American history. He raked in $107.6 million in donations, but his campaign spent almost as much, doling out $104.1 million. The previous spending record was set in 2018 by Sen. Rick Scott, R-Fla., with $85 million, though much of that total was self-funded.

‘All I can say is this has been overwhelming. I have never been challenged like this,’ Graham said

As CNN reported, Harrison raised $57 million during the final full quarter of the campaign, the largest single-quarter total by any candidate in US Senate history.

In the end, Harrison’s momentum wasn’t enough to win in a Republican stronghold as Graham repeatedly tried to tie him to the more progressive members of the Democratic party.

Trump won South Carolina by 14 points in 2016 and carried the independent vote. In 2014, Graham beat his most recent Democratic challenger by nearly 16 points.

“All I can say is this has been overwhelming,” Graham said in his victory speech.

Graham will likely return as chair of the Senate Judiciary Committee if Republicans retain the Senate.

“What I am going to do is take the spirit of this win and harness it and do the best I can as long as I can.”

“These terms are six years, but I learned something early on.”

“There is no promise [of] tomorrow.”

Graham earlier warned that liberals were raising large sums of money to punish him for the recent confirmation of Supreme Court Justice Amy Coney Barrett.

But Graham held onto the seat.

Graham will likely return as chair of the Senate Judiciary Committee if Republicans retain the Senate.