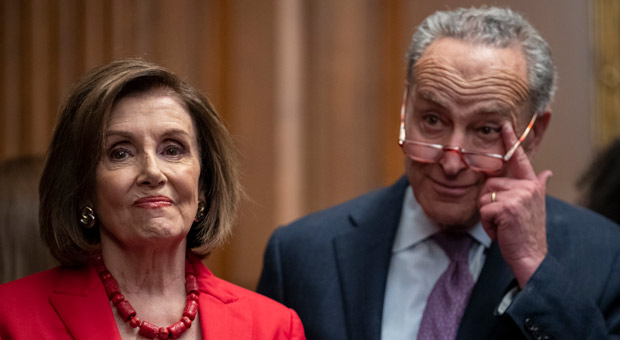 Democrats are demanding that the memory of George Floyd must be honored and never forgotten, yet they can’t seem to even remember his name.

Democratic Party leaders in Washington D.C. – Senate Minority Leader Chuck Schumer and House Speaker Nancy Pelosi – both forgot Mr. Floyd’s name while telling the public that he must be remembered.

Floyd, a black man, died in the custody of Minneapolis police on May 25.

His death has triggered widespread unrest and Black Lives Matter protests, with many ending in violent riots and looting.

The killing of Floyd has also led to calls to defund or abolish police forces, law courts, and even prisons, nationwide.

According to Sen. Schumer, “Floyd Taylor” must never be forgotten.

According to Pelosi, we must always remember “George Kirby,” as can be seen below:

.@SpeakerPelosi & @chuckschumer, you are doing such an honorable job of honoring Floyd Taylor, I mean, George Taylor, um I mean, George Kirby…… pic.twitter.com/14ilSGrrtH

Unable to process the name of George Floyd, in whose name she has championed protests across the nation, Pelosi apparently was referring to the great comedian and superb impressionist George Kirby.

Kirby came to fame in the 1960s and appeared on shows such as The Ed Sullivan Show, The Dean Martin Show, The Jackie Gleason Show, Rowan and Martin’s Laugh-In, and The Tonight Show with Johnny Cason.

As for Schumer, it’s unlikely that he was referencing the real-life blues singer Floyd Taylor.

It’s more likely the New York senator was conflating the names of George Floyd, who died after a Minneapolis police offer knelt on his neck, and Breonna Taylor, an emergency medical technician who was fatally shot by Louisville Metro Police Department officers in March.

One might think that Pelosi and Schumer may remember George Floyd’s name more easily, judging by their recent remarks.

Here are some statements from the two Democrat power brokers:

For something to happen, they’re going to have to face the realities of police brutalities, the realities of the need for justice in policing, and the recognition that there’s many good people in law enforcement, but not all.

And that we have to address those concerns.

So, when they admit that, and have some suggestions that are worthy of consideration — but so far they were trying to get away with murder, actually — the murder of George Floyd.

On Wednesday, Schumer was asked, “What’s your reaction, do you think it was appropriate for Speaker Pelosi to say that Republicans are quote, ‘getting away with murder of George Floyd’?”

“Pelosi’s answered that question herself and whatever — what she said was fine with me,” Schumer answered.

Another statement as recently as Thursday from Pelosi: “Exactly one month ago, George Floyd spoke his final words, ‘I can’t breathe,’ and changed the course of history in our nation.

“I’ll never forget that, nor will many others,” Pelosi declared.

“I also will never forget his calling out for his mama right there at the end.”

While discussing gun control, a reporter asked, “Have you spoken with him?

“What do you think he’s wrestling with?”

Pelosi replied, “You want me to tell you what goes on in the president’s ‘mind?’”

She made air-quotes with the fingers of both hands.