Democrat Threatens to Call Police if Pledge of Allegiance Recited 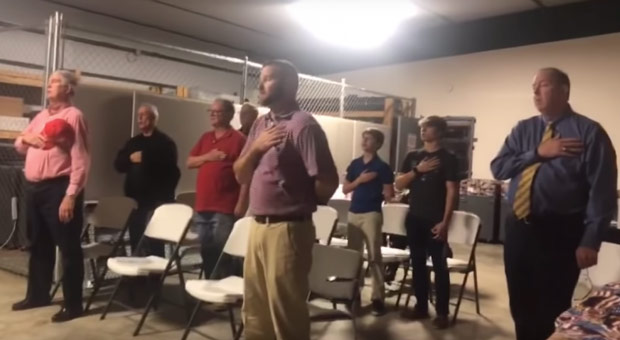 A North Carolina Democrat county official threatened to call the police after patriotic residents recited the Pledge of Allegiance in defiance of a vote to ban it.

The Democratic chairwoman of an NC county board of elections, Louella Thompson, made the threat at the end of a contentious meeting.

During the meeting with the Bladen County Board of Elections in the east of the state, Thompson warned patriots in attendance that reciting the pledge constituted a disruption of a government meeting.

“If that happens again law enforcement will be called,” Thompson said.

“It is against the law to disrupt a meeting.

“That is going on and that is what happened today with the reciting of the pledge.”

The threat came after a local board of elections meeting on Tuesday when three Democratic members of the board voted down a proposal to add the Pledge of Allegiance to the agenda.

The vote prompted an audience-member-led recitation — and the Democratic chairwoman threatened to call the police if anyone did the same at the next meeting, according to the Washington Free Beacon.

The board of elections meeting for the county had been attended and filmed in its entirety by a local reporter for the Bladen Online media outlet.

The first order of business raised at the meeting was in regard to the Pledge and was raised by board member Emory White, a military veteran.

Only White and the other Republican on the board, fellow veteran Michael Aycock, voted in favor of adding the Pledge to the agenda, while chairwoman Louella Thompson and fellow Democratic board members Deborah Belle and Patsy Sheppard voted against it.

Board of Elections Chairwoman in Bladen County NC, Louella Thompson banned the Pledge of Allegiance from meetings,

And said she is going to have police present to arrest anyone who stands to say it.

She needs to be fired ASAP.

A few moments after that vote, the floor was opened up for attendees to address the board with any questions, and several people spoke out in opposition to the decision to not recite the pledge prior to the start of board meetings, as is done with an opening invocation.

One person who spoke up in favor of the pledge actually proceeded to recite it, and he was joined by the vast majority of those in attendance, as well as the two Republican board members.

Thompson called for a short recess following the recitation of the pledge and then later, after the board had reconvened, the meeting went on as usual.

However, at the tail end of the meeting, just before it was adjourned, Thompson raised the issue of the earlier “disruption” regarding the pledge.

“The next meeting, if that happens again, law enforcement will be called because it is against the law to disrupt a meeting that is going on, and that is what happened today with the reciting of the pledge,” she said.

“So be prepared for that.”

According to the local Bladen Journal, Thompson had been appointed to her position as chair of the County Board of Elections by Democratic Gov. Roy Cooper, and the governor’s office was asked about what had transpired at that meeting regarding the pledge.

As it turns out, the Democratic governor didn’t feel the same way as the chairwoman he appointed.

“The Governor leads the Pledge of Allegiance before every Council of State meeting,” spokeswoman Sadie Weiner wrote in an email to the Bladen Journal.

“He doesn’t agree with the action taken and he thinks it’s a good practice to say it before a Board of Elections meeting.”

The vote to ban the Pledge triggered patriots in attendance to stand and recite it, including the two Republican vets on the board

While the governor’s support for the pledge is appreciated, he clearly avoided addressing the issue of the threat to call law enforcement for a future recitation at a meeting.

Republican North Carolina Rep. Dan Bishop, who represents part of the county, had no qualms about calling out that particular aspect of the incident.

“I was appalled that the Chairwoman of the Bladen County Board of Elections will prevent board members — on threat of arrest — from reciting the Pledge of Allegiance,” Bishop said in a statement.

“It shows a twisted moral code to oppress the right to honor a flag that stands for freedom from oppression.

“I stand with the board members who continue to revere and respect our flag and those who lost their lives defending it.”

It is nothing short of amazing that some folks on the left have chosen to make something as fundamental as the pledge of allegiance into a divisive political issue.

The fact that Thompson would actually threaten to call the police over the recitation of the pledge — in essence, calling the government to complain about people pledging loyalty to the government — is downright baffling and hopefully, she will reconsider when the issue inevitably arises again.