President and First Lady Melania Trump greeted with deafening cheers: ‘THIS IS AMERICA’ 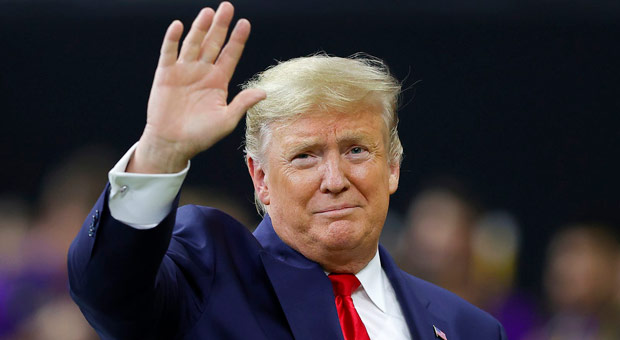 The crowd went wild as the first couple was brought onto the field for the national anthem ahead of the national title game between the Clemson Tigers and the LSU Tigers.

After entering the stadium through a tunnel, the president and first lady immediately received raucous applause, as chants of “USA” echoed around the stadium as they made their way to the 40-yard-line for the Star Spangled Banner.

The crowd went absolutely wild for @realDonaldTrump
and @FLOTUS
at the College Football National Championship game as they walked onto the field.

Chants of “USA” broke out.

President Trump was seen singing along to the national anthem.

Speaking to a reporter after the anthem, Trump said he likes “both” teams’ chances of winning.

USA Today tweeted out a video that was taken from a different place in the stadium that showed that the cheers were even louder than they appeared on the broadcast of the game.

The reaction inside Mercedes-Benz Superdome to President Trump and First Lady Melania Trump walked onto the field. pic.twitter.com/DgbWxvy6cW

Before leaving the White House for the game on Monday, Trump told reporters, “It’ll be a great game.

“It’ll be something that a lot of people want to see.

“And we’ll be in New Orleans, and we look forward to it.”

In November, Trump was greeted with thundering applause when he attended a rivalry game between LSU and Alabama in Tuscaloosa, Alabama.

Last year, Trump hosted the Clemson Tigers at the White House after they beat the Alabama Crimson Tide in the 2019 College Football Playoff National Championship game.

Trump tweeted, “Great being with the National Champion Clemson Tigers last night at the White House.

“Because of the Shutdown I served them massive amounts of Fast Food (I paid), over 1000 hamburgers etc.

“Within one hour, it was all gone. Great guys and big eaters!”

Great being with the National Champion Clemson Tigers last night at the White House. Because of the Shutdown I served them massive amounts of Fast Food (I paid), over 1000 hamburgers etc. Within one hour, it was all gone. Great guys and big eaters!

The media and other opponents of the president criticized Trump for serving the players fast food, that he paid for, during their visit.

However, the players loved the gesture, including Clemson QB Trevor Lawrence, who told TMZ, “It was awesome.

“We had McDonalds and everything. It was good!”

The reception was a far cry from the one the president received at the 2019 MLB World Series.

Trump attended game five of the series in Washington, DC between the Washington Nationals and Houston Astros and was booed by much of the crowd.

Nancy Pelosi Rattles Saber, Threatens To Remove Trump From WH “One Way or Another”