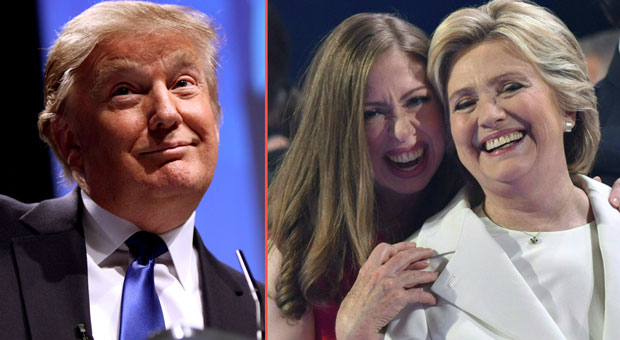 The Clintons’ only offspring, Chelsea Clinton, has claimed that President Donald Trump is “obsessed” with her mother because Hillary “won the popular vote” in the 2016 election.

Speaking during an interview on the daytime talk show “The Real,” Chelsea elaborated on her theory further, claiming the president feels “intimated” and “threatened” by the twice-failed Democratic presidential candidate.

“He’s obsessed with her!” Clinton said as the gossiping hosts nodded in agreement.

“I mean, he talks about her all the time,” Chelsea claimed.

“He talks about her in interviews,” she added.

“He talks about her in rallies. He tweets about her.”

“I think it’s really clear that he has never gotten over the fact that she won the popular vote by more than 3 million votes,” Clinton continued.

She then explained that she believes Trump is “intimidated” by strong women.

“I don’t think it’s an accident that we saw kind of how he reacted to Kamala Harris’ extraordinary debate performance, which similarly, he felt quite threatened by.”

Clinton also said she wishes Trump would think less about her mother and keep his mind on the Chinese Plague crisis instead.

Hillary Clinton herself has made similar allegations that the presdient is supposedly “obssesed” with her crushing election defeat.

Question: Will the Clintons ever get over the 2016 election? – Answer: No.

As Neon Nettle reported in September last year, Hillary claimed during an interview that Trump is “obsessed with me.”

Speaking to “CBS Sunday Morning” alongside her daughter, Chelsea, Hillary insisted that President Trump is “obsessed” with her because he is “an illegitimate president.”

“Trump right now poses a direct threat, a clear and present danger to the institutions of our government, to the rule of law, to our standing in the world.”

“Look, there were many funny things that happened in my election that will not happen again,” she continued.

“And I’m hoping that both the public and press understand the way Trump plays the game … he knows he’s an illegitimate president.”

Rigged: The ‘Impartial’ Debate Commission Launches An Attack On Trump Before 3rd Debate