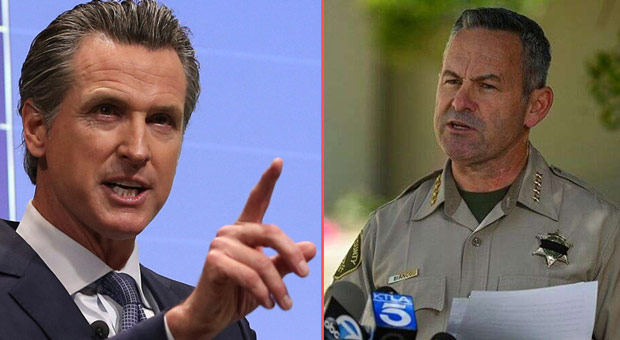 A California sheriff has risen up in defiance against the state’s Democrat governor, declaring that he is refusing to enforce the draconian stay-at-home order that makes “criminals” out of people “for exercising their constitutional rights.”

In a powerful speech before the Riverside County Board of Supervisors, Riverside County Sheriff Chad Bianco reiterated his office will not back down from his refusal to enforce Gov. Gavin Newsom’s statewide stay-at-home orders in his county.

In early April, Bianco stated that he would not set up “any type of police state” in his county.

Bianco spoke Wednesday as the Board considered whether to remove the county health officer’s order.

Bianco told the Board that he refuses to “make criminals out of business owners, single moms, and otherwise healthy individuals for exercising their constitutional rights.”

Eight weeks ago, officials, including Gov. Gavin Newsom (D) “participated in something never done before in our nation’s history,” Bianco began.

Government “ordered residents into their homes, closed their businesses, made them wear masks, forbid them from going to church, and eliminated constitutional freedoms put in place over 200 years ago,” he explained.

“In the name of a public health crisis, our civil liberties and constitutional protections were placed on hold,” he continued.

Officials, Bianco said, have asked a lot of residents over the last two months as part of a greater effort to flatten the curve and prevent hospitals from being completely overwhelmed by coronavirus patients.

“It worked,” he said, listing a series of statistics:

“What isn’t being emphasized is that 2,000 of the 4,300 people who have tested positive have already recovered and returned to work.

“What that means is that out of two and a half million people in Riverside County, we have only 2,300 residents positive with this virus.

“Statistically, that is less than a tenth of one percent.”

Forthcoming decisions from officials should be based on “facts and data, not protections and fear,” he continued, stressing that residents do not need to live in fear and noting that the risk remains low for people without serious medical conditions. However, he urged at-risk residents to remain at home.

Bianco said he did not enforce the stay-at-home order from the beginning, partly because he “trusted our residents’ ability to do the right thing without fear of being arrested” and emphasized that he continues to hold that position:

“I knew they could be trusted to act as responsible adults, and I was correct.

“As we continue, I will reinforce my position.

“Not only do we not have the resources to enforce unreasonable orders, I refuse to make criminals out of business owners, single moms, and otherwise healthy individuals for exercising their constitutional rights.

The original projections and fears that caused orders to be put into place in the first place, he added, have been “proven wrong.”

“There cannot be a new normal,” he warned, citing the country’s “fundamental freedoms of life, liberty, and the pursuit of happiness.”

“Any new normal is a direct attack on the basic rights, which set us apart and make us the greatest country in the world,” he added.

Gov. Newsom warned California will not return to normal until a vaccine is developed and available

On Tuesday, Gov. Newsom warned that, despite the state gradually entering into the next phase of economic recovery, California will not return to normal until a vaccine is developed and available, according to Breitbart.

“We’re not going back to normal,” he said during Tuesday’s press briefing.

“It’s a new normal with adaptations and modifications until we get to immunity and a vaccine,” he added — something some experts caution may never come to fruition.