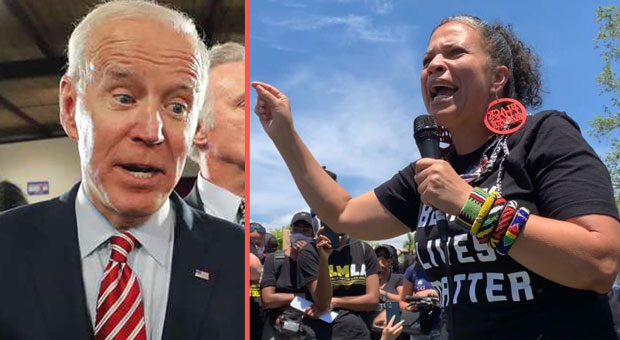 A co-founder of the radical-left Black Lives Matter organization is warning her followers that Democrat presidential nominee Joe Biden is a “violent white supremacist.”

Abdullah made the remarks during an interview with ABC News for a report on Black Lives Matter’s impact on the election.

“People are feeling dismayed that the choices are between, you know, a violent white supremacist and another person who represents that same system,” the activist said.

Abdullah, a California State University professor, previously faced charges arising from her participation in the 2019 BLM protests, including battery on a LAPD officer.

Following pressure against the city from protesters, the charges were later dropped, however.

Other BLM leaders voiced similar anxiety about the lack of change they can expect from their choices in the election, according to The Blaze.

“I think sometimes, Joe Biden and [President Donald] Trump, and our party on both sides are blinded by the struggles that the lower end of Americans are feeling today,” Lawrence Nathaniel, the co-founder of “I Can’t Breathe” in South Carolina, said.

Nathaniel says he is considering voting for a third-party candidate.

The report from ABC documented other BLM supporters who were using the momentum from the protests in order to register younger Americans to vote.

Abdullah added that no matter what happens in the election, she planned to continue protesting in the streets.

“In the midst of protest,” she said, “a recognition that no matter what the outcome is to any of these things, we have to stay in the streets.”

Dr. Melina Abdullah suggests Joe Biden may be faking his support for the radical-left

Support for the Black Lives Matter movement has fallen among Americans, according to a September poll.

The survey conducted by the Associated Press and NORC Center for Public Affairs Research found that only 39% of Americans supported BLM after finding 54% support in the same poll from June.