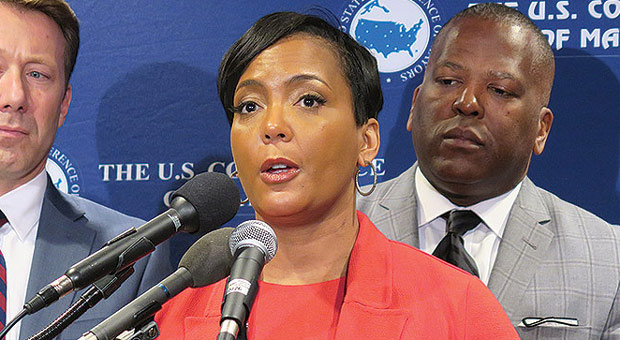 Atlanta’s Democrat Mayor Keisha Lance Bottoms has attempted to shift the blame, from herself onto President Donald Trump, for the death of an 8-year-old African-American girl, who was murdered by protesters in her city late last week.

Mayor Bottoms suggested during a Monday interview on CNN that Trump was partly responsible for the young child being shot and killed in a “cop-free” Black Lives Matter “occupied zone” that was being facilitated by the city.

Secoriea Turner was killed late on Saturday when a car she was riding in with her mother was shot up in the parking lot near a Wendy’s that has been seized by far-left protesters.

The restaurant is the location where Rayshard Brooks was killed last month after he resisted arrest and fired a taser in the direction of a pursuing police officer.

CNN host Brooke Baldwin asked Bottoms how such a tragic murder could occur in her city.

SCROLL DOWN FOR VIDEO

“I want to just get right to Secoriea, 8 years of age,” said Baldwin.

“You said it over the weekend: She was a baby. How could this happen?”

“I was listening to [Chicago] Mayor [Lori] Lightfoot, she summed it up,” Bottoms said.

“We talk about systemic racism and the trauma and anxiety and all these things that are happening in our communities. And it is this convergence.”

“And I hate to use the word a perfect storm, but it’s where we are in this country right now,” Bottoms continued.

“And you think about the leadership or the lack thereof that we have coming from the highest office in the land.

“I think that you are seeing so many emotions play out.

“And so, too often, it’s playing out in violence in our streets.”

Reminder @realDonaldTrump: “Every citizen and every community has the right to be … safe in their homes, and safe on our city streets.” pic.twitter.com/TYWOxSfQSM

CNN HOST BROOKE BALDWIN: With me now, the mayor of Atlanta, Mayor Keisha Lance Bottoms. So, Mayor Bottoms, thank you so much for being with me. And I want to just get right to Secoriea, 8 years of age. You said it over the weekend. She was a baby. How could this happen?

KEISHA LANCE BOTTOMS (D), MAYOR OF ATLANTA, GEORGIA: You know, Brooke, that’s the question that we’re all asking ourselves.

And I was listening to Mayor Lightfoot. She summed it up. We talk about systemic racism and the trauma and anxiety and all these things that are happening in our communities. And it is this convergence.

And I hate to use the word a perfect storm, but it’s where we are in this country right now. And you think about the leadership or the lack there of that we have coming from the highest office in the land. I think that you are seeing so many emotions play out.

And so, too often, it’s playing out in violence in our streets.

BALDWIN: I want to come back to this concept in the community of a perfect storm, but I do want to ask about the family first.

We know the family last night was calling on the community to work to help find who killed their daughter. Do you have an update, Mayor Bottoms, just on the search for Secoriea’s killer? Is there any progress there? And have you spoken with the family today?

BOTTOMS: I have not spoken with the family today, but we have received a number of tips. So we are encouraged by that.

There are so many peaceful people in the area and so many people who’ve been gathering in a peaceful way throughout our city over the past few weeks. So, this is — has not been received well by so many people of good conscience. And people are speaking up.

And, hopefully, we will have something more concrete soon.

And then you made it clear when you were speaking last night these are folks in the same community shooting each other. And as you also point out, you cannot blame police. Why?

BOTTOMS: Well, the point that I was hoping to make, and I hope that it was received that way in the way in which I was intending, the irony of this is that this is on a site that was supposed to be a tribute to a man who was killed by police, who spoke about his daughter’s eighth birthday the next day.

He spoke about her birthday party in his encounter with a police officer. And the irony was that, in — this place of peace and what should have been a place of honor and tribute turned into deadly violence.

There were two shooters is what Secoriea’s mothers said. One shot from that parking lot of the Wendy’s, and one shot from the parking lot that she was attempting to make a U-turn in. And so it is — there are separate issues, but the result is still the same.

There is injustice and there is police brutality in America, period. But there’s also this violence that’s erupting on our streets, often between people within the same community, that is also a problem.

And to someone like Secoriea’s parents to her nearly 50 loved ones who were with us on — yesterday, the result is still the same. Somebody who they love is gone. And I think that we have to deal with both of these issues, and we can’t deal with them if we want to put our heads in the sand and act as if they don’t exist.

BALDWIN: To that point, you said this last night — quote — “During the civil rights movement, there was a common enemy. Now we’re fighting from within.”

So two questions: How do you stop that infighting, and then what or who, in your view, is that common enemy?

BOTTOMS: Well, in the civil rights movement, there was a — there was this defined objective. And that objective was to receive equal rights for all Americans, particularly African-Americans, during that time.

This movement is a very different movement. It’s a more global movement. And I think that, at this moment in time, when you have so many people interested in making change across the globe, I don’t think that it is helpful to this movement, when it is being overshadowed by violence and things and instances that are taking away from the importance of this movement.

But when you have a child, an 8-year-old child who is killed just feet away from the site where we are protesting the killing of an unarmed black man, then we have got to acknowledge that we have got some layers of issues in our communities, and we have got to confront them both with the same anger and with the same sense of urgency.

BALDWIN: Atlanta Mayor Keisha Lance Bottoms, I appreciate you speaking up and out on this. And thank you for taking the time with me.

And, of course, our condolences to Secoriea’s family. Thank you.

As Neon Nettle previously reported, Mayor Bottoms ordered the BLM “occupied zone” around the downtown Wendy’s to be cleared after Secoriea was shot and killed at the site.

The protest site is set to be dismantled and cleared after the child was allegedly murdered by protesters Sunday.

Secoriea was killed when her mother exited the freeway and turned into the parking lot where a Wendy’s was burned down and seized to host the “occupied” protest.

The “cop-free” protest zone is similar to the one that cropped up in Seattle’s Capitol Hill neighborhood early in June known as “CHOP” or “CHAZ.”

The woman’s vehicle was reportedly swarmed by protesters, who fired a number of shots at the family, hitting Secoria.