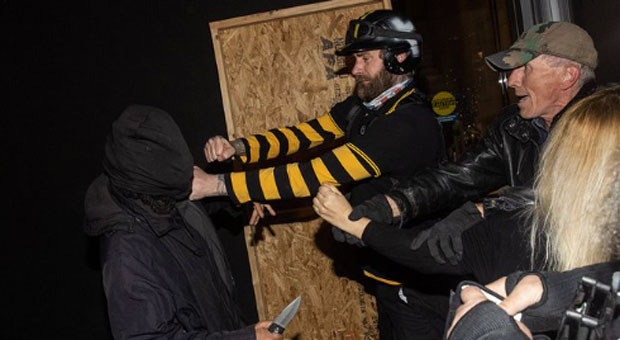 An alleged Antifa member has gone on a brutal rampage at the “Stop the Steal” rally in Washington D.C., stabbing four Trump supporters, according to reports.

The lone knife-wielding leftist reportedly confronted one pro-Trump demonstrator and brandished the weapon before using it on several of the rally-goers.

Tweeted videos show the individual allegedly stabbing Trump supporters on the streets near the White House on Saturday night.

Additional videos show the man being arrested by police after the Trump supporters retaliated and apprehended him.

SCROLL DOWN FOR VIDEOS (WARNING: Violence)

Four Trump supporters were reportedly stabbed by the knifeman

According to Breitbart, a pair of videos tweeted by Mauro Gomez reportedly shows a “BLM/Antifa allegedly stabs 2 Trump supporters.”

At least one proud boy stabbed after random lone protester fights with multiple proud boys. This protester was the only one around in a mob of a few hundred pb’s and fought with one prior to this video starting and him brandishing a knife pic.twitter.com/OeK3Zwp9cv

A video tweeted by Eric Thomas shows one of the stabbing victims being tended to by police.

a #ProudBoy is stabbed during a fight with #antifa and requests MPD attention. #DC #BlackLivesMatter pic.twitter.com/4XNXzvVaG9

Miss N0b0dy tweeted another video showing a second stabbing victim being tended to by Trump supporters and police.

Another Twitter user showed video screenshots he claims show a knife being held by an Antifa attacker.

#DC
The man had a knife for sure pic.twitter.com/lbxLJACI7d

More confrontations continue as Antifa and Proud Boys clash in the streets.

Despite repeated acts of violence, Democrats have refused to condemn Antifa or, in some cases, even protested that they don’t exist.

The incident occurred on Saturday night as Trump supporters gathered in Washington D.C. for the ‘Stop the Steal’ rally

You all helped make this happen. It would be a shame if tons of voters saw just how ridiculous Joe Biden’s Antifa claims are. Antifa isn’t an idea Joe, they’re 100% organized. #JustSayNoToAntifaJoe pic.twitter.com/CMVdh9RpGL

Biden insisted that the group is not responsible for violent rioting by arguing that Antifa is simply “an idea” and “not an organization.”

Antifa is “not militia,” Biden protested.

FBI has issued subpoena in investigation into Texas AG Paxton