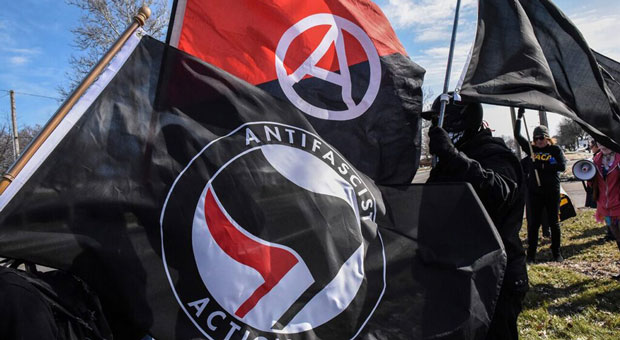 ‘This is so cool,’ the group tweeted on the caption of the article.

A group aligned with violent left-wing group Antifa praised an alleged arson attempt at a police officer’s home in a tweet sent out on Sunday.

Pacific Northwest Youth Liberation Front posted an article on how federal law enforcement agencies were investigating the incident, which is believed to be connected to Portland protests.

The Washington County Sheriff’s Office has already claimed the incident was arson, according to Oregon Public Broadcasting.

“This is so cool,” the group tweeted on the caption of the article.

A law enforcement official said there was a “concern in this case that the officer was surveilled and followed home.”

The PNW Youth Liberation Front describes itself as a:

The group’s goal is “Direct action towards total liberation.”

They have also pushed back against the notion that protests should be peaceful.

“To all the people on the streets who call themselves ‘peaceful protesters.’ I don’t know where you’ve been for the past 4+ years, but being peaceful doesn’t stop the police, how do I know this?” the account tweeted this summer.

“Because people have been doing this for years before you hopped on the protest trend.”

“We’ve stood in the streets, hands up, non violent, and time and time again brutalized, shot with chemical weapons, and arrested,” PNW Youth Liberation Front added in another tweet.

“The pigs are in a PR battle so they say there’s a difference from ‘peaceful’ and ‘violent’ protesters,” the group added in another post.

“When in fact what we are fighting is the ultimate form of violence, making any and all resistance self and community defense.”

“Mr. Dorsey, who the hell elected you?” Cruz blasted as the Twitter boss squirmed.

“And why do you persist in behaving as a Democratic super PAC?”

[READ MORE] Trump Lawyer Drops a Bomb: We Have Evidence to ‘Overturn Results in Multiple States’