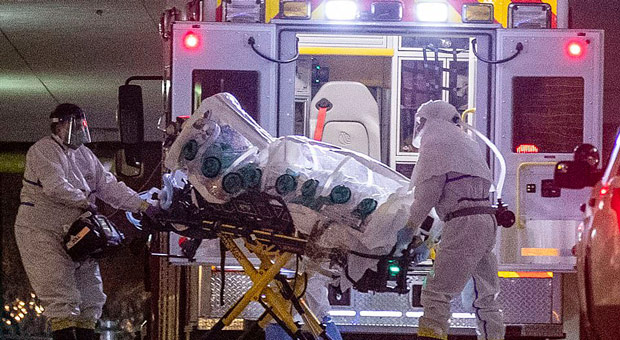 A 36-year-old American coronavirus patient has been rushed to the Nebraska Biocontainment Unit in a critical condition, as the number of U.S. cases and deaths continues to rise.

The patient, an Omaha woman who is Nebraska’s first COVID-19 case, recently returned from the United Kingdom.

The number of cases of coronavirus in the United States has now topped 400, as the outbreak rapidly spreads and the death toll hits 19.

On Saturday night, the District of Columbia and 31 states reported at least one confirmed or presumptive positive case, with those cases totaling 372.

Including those trapped aboard the quarantined cruise ship Grand Princess off San Francisco, and those infected people repatriated from abroad, the total is at least 442.

Washington state has recorded the most cases with 103, including 16 deaths, while New York has 89 cases and California, has 81 reported cases and one death.

The Nebraska coronavirus patient was rushed to a biocontainment unit

In the interior of the country, a number of more sparsely populated states reported their first cases on Saturday, including Missouri, Indiana, Minnesota, and Nebraska.

In Nebraska, there were dramatic scenes as a woman who tested positive for the virus was rushed from a community hospital to the nation’s leading biocontainment unit at he University of Nebraska Medical Center Omaha.

The 36-year-old Nebraska resident was photographed being transported to the facility in a hi-tech isolation pod late Friday.

According to the Omaha World-Herald, the woman, who is “very seriously ill,” had been at Methodist Hospital in Omaha before being taken by ambulance to the biocontainment unit, which is on the University of Nebraska Medical Center campus.

Desperate to avoid contagion, the woman was placed in an isolation pod, made of heavy-duty plastic and complete with a dozen ports for ventilators and other tubes.

Medics donned plastic face shields, rubber gloves, and rain boots as they moved her from the ambulance on a stretcher.

Earlier Friday, Nebraska Gov. Pete Ricketts and health officials announced that the woman is the state’s first confirmed case of a person with the coronavirus disease, COVID-19.

The woman, who had traveled with her father to England from Feb. 18 to 27, became ill Feb. 25, said Dr. Robert Penn, an infectious disease specialist at Methodist.

Her symptoms remained relatively mild until Thursday, he said. A chest CT scan has shown that the disease is evolving into acute respiratory distress syndrome, Penn said.

Officials said there is no evidence yet that the virus has spread in the state.

Very few people with the coronavirus disease will be treated in the biocontainment unit, Nebraska Medicine officials said.

The unit is reserved for people with the most severe cases of COVID-19 or for cases such as the cruise ship passengers.

The situation in Nebraska comes on a day of fast-moving developments as :

[RELATED] American with coronavirus speaks out about what the disease is really like, shares advice